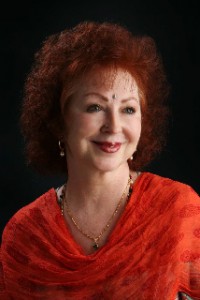 An awareness of God from a very early age and ongoing divine challenges throughout her life, have moulded and trained Mynavati to be who she is today.  The challenges, some of which Mynavati relates in her books, began immediately from birth as well as with accompanying divine help, grace and inspiration.

Near death experiences catapulted Mynavati from the possibility of a mundane worldly existence to one where all meaning was filled with Divine Love. Drowning at the age of 9, Mynavati experienced a spiritual heart-awakening as she chose to live.  At the age of 30, she again faced physical death as well as the death of life as she knew it and experienced the first of a series of Kundalini energy awakenings, catapulting her to, ever deeper, ongoing transformation.

Between the ages of 30 to 40 Mynavati became a well-known and well-respected healer and intuitive, helping and teaching others.  She explored therapeutic techniques, shamanic traditions and Jungian psychology and entered 3 years personal psychoanalysis with Bani Shorter, a respected Jungian Analysist. In addition to a BA degree in Psychology and Sociology, Mynavati also trained in Jungian based Dreamwork with Strephon Kaplan Williams and on completion became a dream leader in her native Edinburgh.

Mynavati was then catapulted into a deeper Truth when she travelled to India in 1993 at the invitation of Ringu Tulku Rinpoche and was introduced to Tibetan Buddhist teachings and Indian Advaita philosophy through many wonderful holy men and women from the North to the South of India.

She remained with Rinpoche and his family in the Himalayas in Sikkim for more than 2 years.  During this special time, Mynavati received teachings and Initiations from Rinpoche as well as His Eminence Tai Situ Pa, His Eminence Gyaltsop Rinpoche and Dodrup Rinpoche who were also in Sikkim at that time and who were the residing heads of The Kagyu Lineage.

In 2000/2001, she met the head of the Kagyu Lineage His Holiness 17th Gyalwang Karmapa and remained with him for some weeks while she received refuge and teachings from His Holiness. He named her Karma Chozemo Lamo, The action of the Goddess whose wishes in the Dharma are fulfilled.

In the Indian Vedic tradition she has received blessings and teachings, in particular from Her Holiness Mata Amritananda Mayi, Mother Meera, Sri HWL Poonjaji, affectionately known as Papaji and from her Guru, Bhagavan Sri Sathya Sai Baba.

The Self-Realised Advaita Master, Sri H.W.L. Poonjaji, who was a disciple of Bhagawan Ramana Maharishi, gave the name Mynavati to her.  Before Poonjaji left his body in 1997, Mynavati stayed in Lucknow, India for more than 2 years and studied with Him there.

Mynavati co-ordinated the opening of a Tibetan Buddhist Centre in Bangalore called Choe Khor Sum Ling which was founded in 2003 by Lama Zopa Rinpoche at the request of His Holiness 14th Dalai Lama.   The Centre is for the study and practice of Mahayana Buddhism following the lineage and example of Lord Buddha. The Centre name means ‘The Three Turnings of the Wheel of Dharma.’

In 2004 His Holiness Dalai Lama gave his first public talk in Bangalore at the invitation of the Centre.  As co-ordinator of the Centre, Mynavati officially invited H.H. Dalai Lama to come and was one of the leading helpers in the organization of the event.

Shortly after the establishment of the Centre and the event of His Holiness Dalai Lama’s public talk, Mynavati happily stepped down from her co-ordinator role so that local Indian people could take over the running of the Centre and help facilitate the monks from Sera Monastery to continue their teachings.

Mynavati remained for many years in India with her beloved Guru, Sri Sathya Sai Baba and had the grace to sing for Him in International choirs as well as helping to organize some of the adult and children’s International Christmas Choirs.

Through her deep devotion to Sai Baba and the inspiration and Love she received from Him, Mynavati has written 6 published books to date.

Mynavati now happily resides in her native Scotland in the Highlands and continues to visit her beloved India each year. She offers individual help to those who are ready for something spiritually deeper as well as spiritual healing retreats.

If you wish to personally contact Mynavati, please email: