Meaning of the name Mynavati 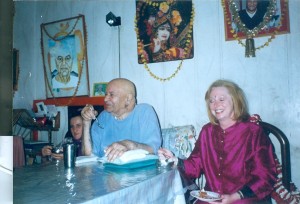 The essence of the name Mynavati means she who dispels illusion.

The Self-Realised Advaita Master, Sri H.W.L. Poonjaji, affectionately called Papaji was a Disciple of Bhagawan Ramana Maharishi. He gave me the name Mynavati in 1995.  Papaji left His body in 1997 but before this, I stayed in Lucknow, India for more than 2 years and studied with him.

When Papaji gave me my name, he told me this story.

Mynavati, was a Queen in ancient India. She was a realized soul who lived to a great age. Her son, Raja Gopichand, ruled the country however he had little care for his Kingdom and lived a life immersed in the senses. He was married to the most beautiful women of the land and was lost in the sensual pleasures of the world and had no care for his Kingdom.

One day, while watching the young King from her balcony, languidly soaking in rose petal water while being bathed by some of his wives, Mynavati’s tears flowed and dropped onto the top of her son’s head.  He immediately awakened to the realisation of how he was wasting his life and turned to her for guidance.

Queen Mynavati advised him to now live a life of meditation and service to his people and country, and to never again lose himself in his senses and in careless idleness.  He became a great King and endeavored to help his people in all ways until the day he died.

(In some of the medieval legends sung by the wandering bards of Northern India from the areas of Punjab to Bengal, the legend about Raja Gopi Chand also tell of how after instruction from his mother, Queen Mynavati, he later renounced his throne to become a Nath yogi. (One of the great Natha Siddhi’s) revered with having great powers and perfected spiritual attainment.